There he is: The new commercial for SPARK 7 (Erste Bank)

It’s only been a month since I stood in front of the camera for the new SPARK 7 (Erste Bank) commercial and it can already be seen on TV and various social media platforms.
I’ve got to say, the shoot was really fun, even though it was an extremely busy two days.
In addition to the main commercial, other short spots were shot with me in a huge hall, as well as photos for posters and social media.
The team was working around the clock, since I had to replicate different MEMEs and the backgrounds had to match.
(Oops, now I’ve given too much away. Spoiler alert!)

Long story, short or short story, long:
I think the result is really impressive and the spot turned out to be extremely funny.
Thank you very much, Niels Münter, for your trust and your cool, open style of directing.
A big thank you also to the team from KAISERSCHNITT FILM, as well as to the ladies from SPARK 7 / Erste Bank and the gentlemen from the agency JUNG VON MATT / DONAU for the opportunity.
And of course a big hug to the entire team behind the camera!
To be able to work with this group was simply a dream! 😀 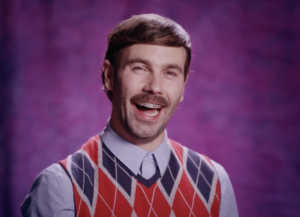