All for one and one for all!!!

…is the motto of this year’s summer.
Looking back on the global events of the past year, this statement finds itself to be even more appropriate. Going forward, we should all stick together and support one another! Not just in bad times, but also in good times.
Just like “The three (four) musketeers” did.
And that brings me straight to the point:
Bruno Max (general manager and director of the Theater zum Fürchten), who has been working successfully in the theatre business for 30 years, staged his first open-air production with the world-famous “The three musketeers“, in which I had the privilege to take on the role of Aramis.
The classic by Alexandre Dumas was given a comedic touch by Bruno, which brings new life to the piece with a perfect cast and fierce battles.

The feeling of being able to be on stage again is simply indescribable and to perform with all of my wonderful castmates is incredibly fun!

The performances take place from 17th of July – 1st of August 2021 from Thursday to Sunday at 8:00 p.m. OPEN AIR at Josef Hyrtl-Platz in Mödling.
In case of poor weather, replacement performances will take place on the 20th and 27th of July and the 3rd of August.
If you still want to get a ticket, you should be quick, because almost all performances are already sold out!

Tickets are available from the following link: 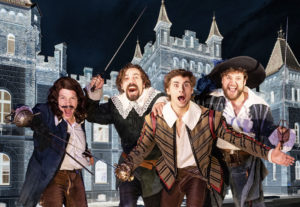