YES, we were a terrific team and had a lot of fun too! 😁
Naturally, this is reflected in the new Aldi Süd commercial, as the spot achieved 6.7 million clicks within just three days on Tik Tok and 3 million on YouTube.
Other short spots can also be seen on Instagram and Tik Tok.
The commercial was shot in Mühlheim an der Ruhr, where the largest Aldi Süd store in the world is located and where I, as the store manager, was able to make my plans for Tik Toker Shirli, Ken and the Elevator Boys (Bene Schulz, Tim Schäcker).

I am grateful that I was again able to work with the incredibly creative and down-to-earth director Niels Münter, who also suggested me for this role and once again placed his trust in me. I also had the honor to stand in front of the camera of Juhani Zebra again, who put me in the right light with all the other great people of this film team.
THANK YOU ALL FOR EVERYTHING!!! 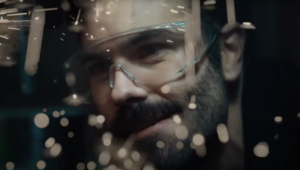